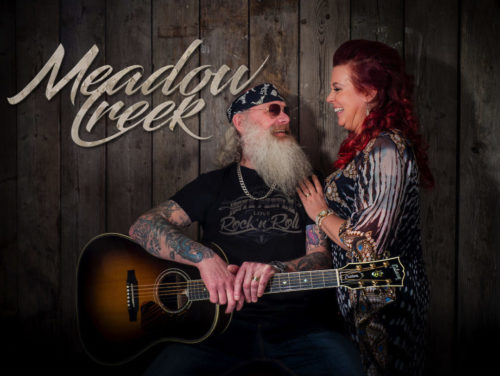 “Meadow Creek” is a duo (and also Mr and Mrs) Linda and Peter Dahl from Degerfors. Linda is a singer and songwriter who got her first record deal at the age of 17 when she was the leadsinger in the band “Angel”. A few years later, the band got a superhit with the song “Sommaren i city”, which became a Swedish summer classic, and is still played regularly at every Swedish radio station.

Peter is a multi-instrumentalist / producer and songwriter who started as a touring guitarist at the age of 11. (!)  As a member of the cover band “Peckas Pack” he has cut off most of Sweden’s party scenes. In 1996, the couple Dahl joined and started one of Sweden’s first ABBA tribute shows together with some friends from Stockholm, “S.O.S – a tribute to ABBA”, touring in both Sweden and the rest of Europe for 16 years!

Meanwhile their love for bluegrass and country music grew stronger and Linda and Peter started the band “Whisky & Dynamite” which became very popular on the Swedish countryscenes. W & D recorded and released 2 albums in 2006-2009 and their songs entered radiostations all over the world.

As songwriters, the couple has written a lot of songs among various artists / bands for example: Roger Pontare, Streaplers, Blender, Sten & Stanley, Drifters, Fernandoz, Barbados, Black Jack and Fryd & Gammen, Fernandoz and others. They have had several songs at “Svensktoppen”  and they also wrote the song who won “Melodifestivalen” in Sweden in the year of  2000.     Their song “När vindarna viskar mitt namn” (cowriter : Thomas Holmstrand) was performed by the artist Roger Pontare. The song won the Swedish final and then ended up at 7th in Eurovision Song Contest.  They also competed in other countries selections for the Eurovision song contest.  In 2016 they wrote the song “Golden Frame” (artist: Matilda & Stefan) who won the regional final in “Svensktoppen nästa”, which Sveriges Radio P4 organizes. In recent years, the couple also worked with Starlab Publishing and wrote J-pop and K-pop songs to the Asian market.

Right now, the radar couple Dahl is in focus with their new duo “Meadow Creek”, and released their debutalbum  ”Til death do us part” in december 2017 . It’s mostly their own material in the style of singer-songwriter / country / americana  or “swedicana” as a reviewer called their style.  Producer of the record is Göran Eriksson (Black Lake Music), which is known as the band leader / guitarist in Jill Johnson’s band.

In the beginning of 2019 Meadow Creek signed with “Lamon Records Nashville” who is now promoting the duo in the states and worldwide.